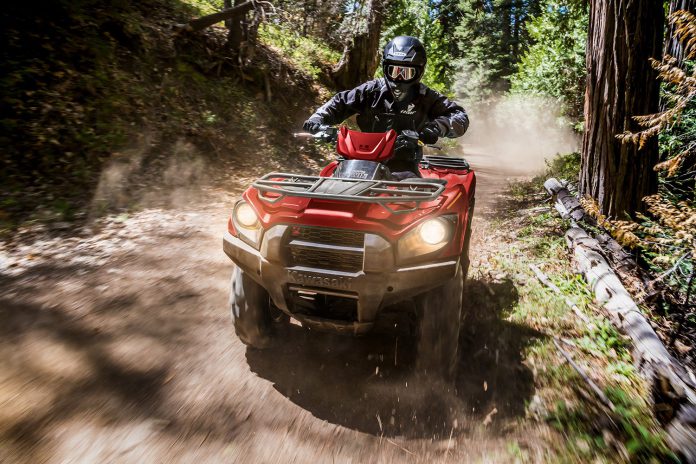 Kawasaki has been doing a great job with updates to its SxS model line-up and those products have really stepped up to meet the competition head-on.

The MULE lineup saw some big changes and updates the last couple of years and obviously the introduction of the KRX has put Kawasaki solidly on the pure sport map.

When it comes to ATVs, the “Big K” has been pretty quiet. It almost seems like the company’s focus has pivoted over to the UTV biz and not much is happening with ATVs. In fact, the number of Kawasaki ATV models offered in MY2020 is rather scant.

However, the Brute Force is still around and serves as the flagship of the Kawasaki ATV brand.

There hasn’t been much updating of the biggest Brute Force – the 750 4x4i – in a few years, but its bones are very good and it has a proven track record for reliability and performance.

Thus, you could argue: “Why bother with an update?”

One reason to change the Brute is because the competition isn’t doing much in its class either, right now.

The Rincon, Grizzly and the long-submerged KingQuad havent seen new injections of displacement and power for almost a decade. To be fair, Yamaha has steadily progressed its Grizzly’s chassis evolution but it still maxes out with a 686cc single as it’s top engine.

The time could be ripe for Kawasaki to put some focus on itself against its Japanese branded competitors with an upgrade in power and new, distinctive bodywork.

One big asset Kawasaki has is that the Brute Force’s powerplant is a V-twin versus those aforementioned competitors that use big displacement singles.

Upping the displacement on that big-inch V-twin to, say 850ccs, would enable the engineers to likely use the same castings and just make adjustments to the bore and stroke measurements.

Even the Teryx V-Twin’s 783cc displacement could work here. It sounds plausible and makes sense from a production standpoint.

As far as bodywork goes, Kawasaki has always been a leader in styling and function with its off-road vehicles. We’d love to see the designers come up with a new look and maybe even some ergonomic adjustments. Top it off with some new digital instrumentation stuff including a built-in GPS and suddenly heads start to turn!

If Kawasaki really wanted to spin some heads they could up the width of the Brute to 55-inches.

The off-road business is ever changing and resting on your laurels is rarely an option. We think the opportunity to move is here right now, but does Kawasaki have the will to make changes?