Justin Waters Takes It on the Road 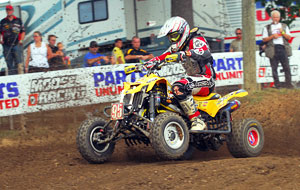 After several successful seasons racing WORCS ATV Nationals, #95 heads for the big show on the other coast

This year, coming back from an early season injury, Justin Waters now finds himself aboard a Team Epic Racing Can-Am DS450, fighting hard for respect in the Amateur ranks of ATVA motocross racing.

At the Can-Am Northeastern ATV National in New Berlin NY June 7-8, Waters was introduced to a different breed of ATV racing.  “I wanted to just ride well enough to make Sunday’s races. I was surprised at my first event to qualify directly in. These guys out here are fast.”

It was a hard and memorable lesson in both Open A and Production A. “I was nervous and didn’t expect the contact that was going on out there.”  He logged a solid 7th and 4th place in his Open A motos, 7th and 14th in Production A.

Heading into the Oakley ATV Southern National in Blountville TN June 20-21, he was gaining confidence, but experienced the aggression in Production A once again.

“I got a good start but got hung up with another rider for a ridiculously long time.  These motos are fast – you can’t afford any mistakes like that. You just don’t have time to ride hard and recover like you can in WORCS.”

He posted his best effort in Open A – earning a podium in fact, with 3rd and 4th place finishes – but was pulled from the class when it was determined he was actually running a motor smaller than class allowances; for upcoming races this season, he plans to run in the 450A or Four Stroke A division.

In the meantime, he’s on the road and training hard.  “I’m starting to get more comfortable riding motocross, starting to get to the point where I can expect some good results. I’ve been training on a more technical motocross track, getting used to that style of riding. Gauging jumps, moving my body more for turns.”

Next up is the Suzuki Summer Nationals in Armaugh PA July 12-13, then Red Bud, then finally wrapping up the ATVA MX series at Loretta Lynn’s in August. Then Waters will head West to hit the last couple rounds of the WORCS season.  “I can’t wait to see how this mx training will help me in WORCS. I want to be on that podium in the Pro class, and this may give me the edge I need.”