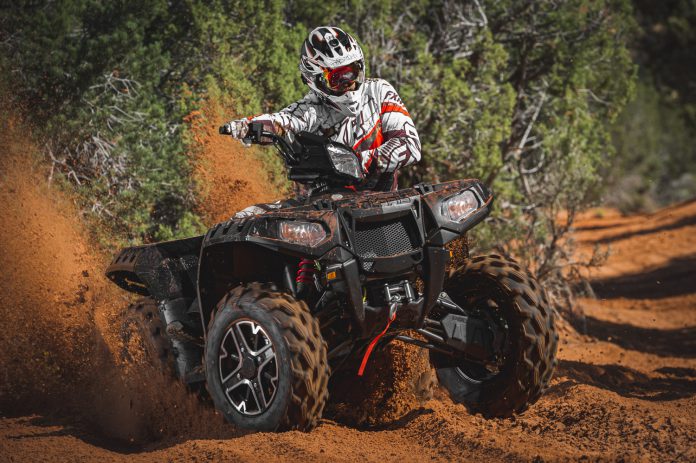 Hog Canyon in Kanab, Utah was just about the perfect location to take our first and long-awaited spin aboard Polaris’ 2015 Sportsman XP 1000.

The red sand, rocky hillsides and mountainous passes got our hearts pumping at every twist and turn with a few hearty blips of the throttle thrown in for good measure.

We know you’ve been dying to hear if it is everything the Scrambler is and that answer’s simple – no and it isn’t supposed to be! While the Scrambler focuses solely on sport performance, the 2015 Polaris Sportsman XP 1000 aims directly at recreational trail riding enthusiasts that crave the highest level of performance from their ATV while also being able to get the job done.

First off, it’s a beautiful ATV. Sounds biased? Maybe, but it’s true! As the company’s flagship sport utility model, The Sportsman XP 1000 is very similar in appearance to the 850 XP boasting glimmering black metallic painted plastic that’s proven durable even when the mercury dips. Fun fact: The Sportsman uses the same type of plastic that Polaris uses on its snowmobiles!

Composite racks look bold and stylish and provide a combined carrying capacity of 360 pounds. There’s plenty of rack there to load them up and still have considerable juice on tap to haul your cargo out of the bush.

If you’re like 65 percent of Sportsman owners though, you’re less concerned about rack capacity and more concerned with just how much juice the Sportsman XP 1000 actually has on tap when it gets loose. Rest easy. There’s plenty.

The Sportsman’s 952cc fuel-injected twin is the same engine as found in the Scrambler with modified clutching and mapping. The Sportsman’s mill churns out an impressive 88 horsepower, which is actually only one horsepower less than the Scrambler. So if you think you’re giving anything up on the top end, think again.

Off engagement, the Sportsman might not lift the front wheels off the ground, but it’s lower gearing has loads of torque for pulling and winching and at low speeds is more manageable than some competitors.

As the engine builds to mid-range, you can really start feeling its legs begin to stretch and once you’re at full jam, all 88 ponies are out of the stable and you’re really moving.

The Sportsman XP 1000 comes standard with Polaris’ Electronic Power Steering, which we felt at slower speeds provided too much input. Once the ATV increased in trail speed however, its EPS regresses to a comfortable level and left us feeling in full control to take corners at speed and ride as hard as our abilities would allow us. If there were one area we’d like to see Polaris fine-tune it would be the level of assist from its EPS at lower speeds.

Polaris knows what its customers want from their ATVs and whether you use yours for work or play or a bit of both, the 2015 Sportsman XP 1000 delivers the highest level of performance in the sexiest most capable package Polaris has put together to date.

Mike Lester
Mike Lester is Staff Photographer and Digital Content Manager for Dirt Trax TV. He is also a Contributing Editor and Guest Correspondent on the show.
Previous articleCAN-AM PILOTS POST ENDURANCE RACING WINS
Next articleTHE LIFEBLOOD OF YOUR ATV OR SXS