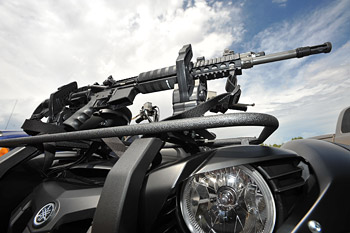 Building a special edition ATV or SXS is nothing new as most manufacturers have them, but when Yamaha decided to dress its flagship Grizzly and Rhino in tactical black my ears perked up.

There was an immediate connection to military special operations and with a single email outlining the adventure ahead I knew I just became the luckiest guy in the business.

Our adventure would take us to the small town of Prescott Arizona. This would be the first time a major manufacturer would expose the off-road national media to a five day tutorial in practical tactical methods of using a firearm.

We would not only be driving Grizzlies and Rhinos around during the class but we’d also be shooting Ruger rifles and handguns. The Ruger SR556 carbine and SR9 pistol would be our tools for the class and with great instructors on hand we were going to learn how to use these works of art in defensive situations.

Gunsite was founded in 1976 by Lt. Col. Jeff Cooper who in his own right had been a WWII and Korean war combat veteran. Mr. Cooper intended the Gunsite facility to be a launching pad for the Modern Technique of the pistol, which he created. Cooper passed away in 2006 but the facility rolls on.

After a great introduction by range master Mike Moore and Gunsite’s new owner Owen “Buz” Mills we were treated to our first hour or so of training. The Ruger representative Ken Jorgenson had us check out our personal weapons for the week and after signing our names on the check list it was time to get to know our weapons. My personal favorite was the Carbine technically named the Ruger SR 556.

Our class room would eventually be the over 2000 acres of the Gunsite location and after loading magazines to the hilt our guns were loaded and ready for action. The basics included getting to know your firearm and being safe around everyone else that had attended with us.

The instructors taught us how to load, unload and properly holster our weapons. The biggest concern at Gunsite is safety so the range masters consistently reminded us of how we needed to be safe as well as techniques on how to be more careful while handling our guns.

Teaching us how to draw and properly aim our handguns and rifles would follow and then we would jump in the Rhino for a course that would include the use of the machine and our Ruger SR556 rifles. Driving out and around the course we had to get out of the machine and locate our targets. We had two shots to hit the silouettes and then it was on to the next target.

Our handguns would be used on the Grizzly as multiple targets had to be located and then just like the Rhino course we would step off of the machine and fire two rounds down range to clear the threats.

My favorite course was the Scrambler where I would use my rifle to shoot eight targets. Each target was allowed the same two shots to hit and then you had to run to the next target and do the same.

The world record is 34 seconds in full gear. Needless to say I did not beat the record as it was held by an 18 year old Marine Recon. I tried my best though and was able to hit each of the eight targets as far away as 80 yards.

This was a great experience and I think Yamaha has really thought outside the box delivering a combination of tactical and practical to the off road community.