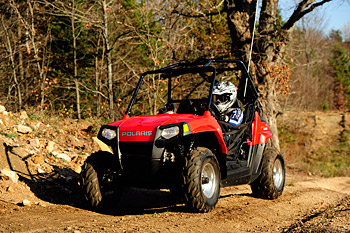 I’m always surprised at how people think they’re invisible to their children.

As I buckled myself into a 4-seater side-x-side recently, I politely asked a passenger in the back seat to buckle up since I didn’t want anyone getting hurt on my watch. The reply I received from this young person was, “My dad doesn’t buckle up so I don’t have too.”

Clearly this was not what I expected, but what I realized was that this passenger had learned a dangerous lesson from his father who was actually riding shotgun next to me!

The fact that a child may or may not seem to be listening to you doesn’t mean he’s unable to see what’s going on every minute he’s around you. Truth is your child sees everything in his line of sight and if he can hear it, it’s likely he’ll repeat it. Worse yet, if he sees you do it, it’s his green light to do exactly the same thing.

Personally, I would rather hurt someone’s feelings and have them return home safe than try to explain just how I allowed their kid to bounce out of a moving vehicle and out onto the trail.

If someone doesn’t take action then we may be standing along the trail someday asking ourselves, “Where did I go wrong?”

Rick Sosebee
Previous articleDEALING WITH YOUR DEALER
Next articlePERFORMANCE ENHANCEMENTS