SXS Competition Is Heating Up Once Again 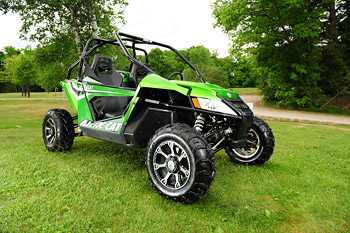 Sometimes the leader of the pack faces challenges from all angles and in the side by side industry it has happened almost every model year since the development of the 50-inch Polaris RZR.

Just announced this week the engineers at Arctic Cat are working on a tight trail model of their popular Wildcat. Getting the same response as the original Wildcat may be a bit different though.

Having a more trail-capable machine rather than another wide-open desert machine seems to be a goal of Arctic Cat. This is where the Prowler line was stationed before the Wildcat came into the picture.

With talk of limited edition models as well as performance models of this narrower Cat, all indications are it will be “sport-focused”. This move by the Thief River Falls manufacturer adds lends more credit to the original 50-inch Polaris RZR.

We have to wonder if this will mean we’ll no longer see the Prowler line continue to grow. Will the Prowler fade to black as the sportier Wildcat take the spotlight in the eyes of the majority of consumers in this market?

One thing’s for sure, the side-by-side market is exploding and with many players in the pure sport segment focusing on the two and four passenger models there is no telling just what awaits consumers in the future.