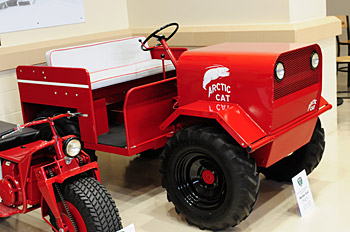 Showcased among the vintage snowmobiles and early projects by the fledgling company, was one of the original fifteen Model 1000 side-x-sides created by Edgar Hetteen in 1965.

This beautifully restored Model 1000 (pictured) is owned and was displayed by Wayne and Cindy Kuster of Grand Forks North Dakota.

The Model 1000 featured 4-wheel drive, an articulated chassis and a 10 horsepower Koehler engine driving through a snowmobile-type torque converter. It also boasted a forward and reverse gearbox. Look closely at the tractor-type tires – pretty much the first mudders before this was even considered an aftermarket upgrade!

Unfortunately in its early days, Arctic Enterprises couldn’t afford to dive into an entirely new market introducing this radical concept and the Model 1000 got shelved.

Now 46 years later, Arctic Cat introduces another radical new design in the 1000 Wildcat, but the Model 1000 will always represent Cats commitment to innovation by introducing vehicles ahead of their time.