WHATEVER HAPPENED TO ATVS FOR THE STREET? 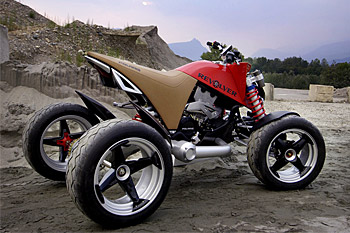 A few years ago there was a lot of spin going on about the fact off-road ATVs could easily be adapted to use on the street.

The whole rumor has kind of faded from prominence the last three or four years but we have to wonder if there isn’t still some interest brewing.

With gasoline prices escalating so rapidly and more and more congestion on the streets from gnarled-up traffic, we have to believe a converted ATV could be a pretty attractive, economical one or two-person vehicle for street use.

Certainly, their viability in urban areas where traffic is always bad could be argued strongly. However, their 4-wheeled design offers incredible stability compared to a motorcycle and would allow greater numbers of drivers (compared to 2-wheeled transportation) to experience the open air attraction and very good gas mileage of a road ATV.

There’s another biggie in this equation: Pollution. Yes, since consumers would be using less fuel and the much smaller displacement engines could be cleaned up even more with catalytic converters, there could be real potential for making an impact on the air quality in urban environments.

Frankly, we think a lot of current models could easily be adapted to street use by adding “turf mode” rear differentials, street tires and basic electronics for lights, signals and a horn. Affordable street ATVs could be a real answer to some pretty significant cultural problems.

Why is this idea currently off the table? It’s mostly because of dopey bureaucrats who can’t tell the difference between a car and an ATV. Their argument is, because these vehicles have four wheels, they are actually cars and should have all the built-in safety stuff cars have.

Add in ABS brakes, air bags, roll bars and yes, seat belts (??!!) and you have a completely different animal at a major price.

Makes you wonder how interested the government really is in solving consumption-pollution problems, doesn’t it?

Dirt Trax Onlinehttps://www.atvmag.com
Check back frequently for new content and follow us on social media!
Previous articleDOES A THOUSAND ALWAYS EQUAL 1000?
Next articleIS YOUR UTV FOR MORE THAN JUST PLAY?