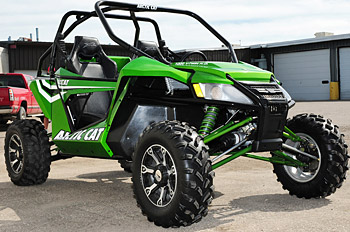 This past weekend marked Arctic Cat’s 50th Anniversary and the town of Thief River Falls Minnesota was powder keg of excitement as enthusiastic Cat faithfuls roamed the streets chomping at the bit to be a part of the festivities.

Events included a swap meet, test rides of prowlers and ATVs and plant tours running all day Friday and Saturday.

Among the events that took place was an amazing vintage showcase featuring just about every model of snowmobile, ATV, side-x-side dirt bike and yes, even bicycle that Arctic Cat has rolled out its doors since Edgar Hetteen founded the company in the early 1960’s.

Perhaps the most highly anticipated element of the whole event was the opportunity for anyone wearing green undies to get a close-up look at Cat’s new RZR XP beater, the 1000 HO Wildcat side-x-side.

With itchy trigger fingers, AC cognoscenti resisted pulling the sheets off the Wildcat until anticipation had reached a boiling point early Saturday afternoon. Your favorite television show and magazine – Dirt Trax, got an exclusive chaperoned sneak peek at the Wildcat on the back lot of the Arctic Cat plant before anyone else.

The Wildcat is a thing of beauty and Cat engineers have done their homework with an offering that will give the RZR XP a run for its money. Dirt Trax Co-Host AJ Lester wiped the drool from his mouth on more than one occasion that day as he envisioned his first ride behind the wheel of the Wildcat.

You can expect a full TEST RIDE of the Wildcat on an upcoming episode of Dirt Trax Television and in Dirt Trax Magazine and expect to see it run against an XP the minute we get it on the ground.

See exclusive photos of the Wildcat by clicking the images to the right.

Dirt Trax Onlinehttps://www.atvmag.com
Check back frequently for new content and follow us on social media!
Previous articleWho Is Listening to Whom?
Next articleWHICH BIG BORE ENGINE LAYOUT IS BEST?