WILL CAN-AM USE BRP’S PDRIVE CLUTCH? 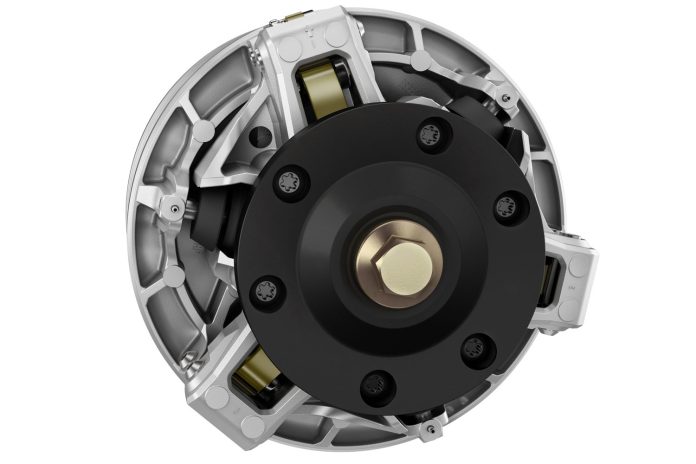 When we’re dealing with off-road brands with deep roots in the snowmobile business, like Polaris, Yamaha, Arctic Cat and BRP, there are often opportunities for these particular OEMs to piggyback development of technology for both off-road as well as snowmobiles.

The advent of an entirely new primary clutch developed by BRP’s Ski-Doo snowmobile division begs some commentary. From our perspective here at DirtTrax we have a birds-eye view of the companys pDrive primary CVT clutch. The concept of re-engineering age-old “sliding button” torque tower clutches has been discussed for many years.

The loads on the torque towers are ridiculous. Basically this friction and load component is overcome by heavier flyweights that generate centrifugal force, pushing the moveable sheave in, overcoming the clutch springs force which is required to push the moveable sheave away from the fixed (inner) sheave.

In the world of snowmobiles this movement is subject to forces generated by engines producing over 160-hp (in Ski-Doo’s situation) and over 200-hp in some competitive snowmobiles.

The pDrive “roller tower” primary changes all the rules in the snowmobile primary clutch paradigm. Instead of sliding buttons dragging their way up and down the torque towers, Ski-Doo has designed a roller system – actually three rollers – to take the loads generated when moving the belt up and down on the inner and outer sheaves.

The introduction of the pDrive roller primary required a complete re-think of calibration components, specifically the flyweights and spring, to adjust to the dramatically reduced friction.

So the question remains: Will the innovative and super efficient pDrive roller tower primary clutch find its way onto Can-Am off-road vehicles? For sure, the pDrive could handle the power output of Rotax’s current stable of turbo and non-turbo 4-strokes. Heres where I think there may be a wrinkle: Dirt.

Yep, the environment SxS and ATVs operate in is understandably dusty and dirty. The exact opposite is true of snowmobiles. Snowmobiles don’t even run foam or paper air cleaners! Why? Winter does not produce the gritty dust and dirt these snowbound engines operate in.

So what about pDrive and dirt? We suspect pDrive may need a more sophisticated filtration system to keep out gritty dust and dirt to ensure the clutch doesn’t experience rapid wear in dirty conditions. That’s just a guess right now.

One thing’s for sure, savvy off-road racers might be well advised to explore the pDrive primary clutch. There are likely performance improvements and efficiencies that could be gained using pDrive under controlled high maintenance, racing conditions.