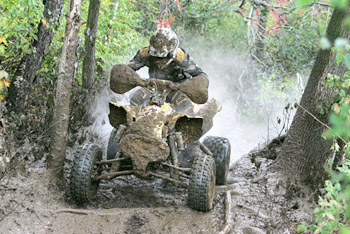 In dramatic fashion, Chris Bithell ended a string of disappointing results by taking the win at the Can-Am Unadilla GNCC.

The Pennsylvanian’s first win of the 2008 Grand National Cross Country Season marks the first XC1 Overall win ever for the Warnert Racing Can-Am team and the Can-Am DS450.

“I started running low on gas,” said Bithell. “It started sputtering, and Bill was right behind me. He bumped me from behind and that actually got me going again, and then I heard he had problems.”

Indeed Ballance’s chain came off in the last turn, cracking his engine case. With his wheels locked, Ballance and his crew pushed his machine to the finish line, and then Ballance had to push through the finish by himself. He could barely get the machine to move as he lifted it uphill, and Kiser, Cook and Borich managed to pass him while he pushed.

“The chain came off and the cases broke, so the wheels were locked up,” said Ballance. “I pushed it with everything I had. I don’t feel too bad now, and with (Adam) McGill so far back, I think we still gained some points.”

McGill, second in the points coming into the race, took the wrong route on the first lap. He was able to fight his way back to a 11th place finish in the XC1 Class.

“It feels good to do it,” said Ockerman. “I don’t know what I’m going to do next, though. I had a chance to run with some of the pros today, but those guys, they’re crazy.”

In the XC1 Class, Kiser was proud of his second-place overall finish. “I knew my speed was good, but I was pretty down on myself after a few bad races,” said the Florida rider. “I want to get up here at the last two races and get one of those glass cups (first place trophy).”

Cook also suffered through two tough races before this return to the podium. “The last two, I made a few bad decisions and didn’t look before I leaped,” said Cook. “I knew we could be back here if we just rode smart.”

Thanks to McGill’s misfortune, Ballance still enjoys a solid points lead and is in position to wrap up his record ninth-straight GNCC Title at the next race, the ITP Power Line Park GNCC in St. Clairsville, Ohio, on October 11.

In the two-hour ATV Morning Race, LTERacing.com Can-Am Rider Bryan Buckhannon took the ATVRiders.com Morning Race Overall Victory, and also won the Open 4×4 Class. Yamaha’s Traci Cecco finished second overall and won the Women’s class over Stefanie Verkade. Cecco made the move on the last lap by picking a line around Tom Clark Motorsports’ Angel Atwell, who got stuck in a bottleneck.

Racing continues tomorrow with the motorcycle portion of the event. Full ATV results are posted at www.gnccracing.com.