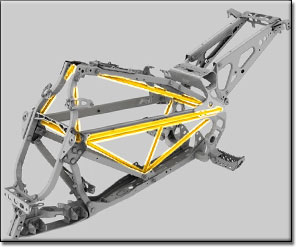 High-tech Frame has No Welds; is Lightest in Industry

Last week BRP revealed the first details of its all-new Can Am™ DS 450™. Now, more is revealed about the sport ATV: its Altec aluminum frame.

This high-tech frame is the lightest frame in the industry. The engineering team was able to keep the weight down by using ultra-modern lock-bolts instead of traditional welds to hold the frame members together. And frame rigidity is enhanced with its dual-pyramid structure.

Company President and CEO José Boisjoli challenged the engineering team to make the DS 450 with the lightest weight, lowest unsprung weight, most mass centralization, and highest power at the time of its release. Watch as the story of this ATV unfolds during the upcoming weeks.

Visit can-amDS450.com to see full reveal details on the challenges from the president and CEO, and now the frame.

In the coming weeks more details about this groundbreaking machine will be revealed, keep checking and spread the word.