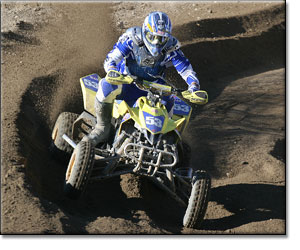 Riding a Yoshimura-backed Suzuki LT-R450 fitted with ITP Holeshot tires, the 30-year-old Murrietta, California, resident rode to victory in five of the series’ 11 events and made four other top-three podium appearances to easily claim the title over three-time QuadCross champion Jeremy Schell.

Ellis managed this performance despite breaking a foot midway through the season. Ellis takes his number one plate into retirement, as he will be stepping away from full-time racing in 2008 to concentrate on his in-house career with Yoshimura.

ITP and Yamaha will once again be presenting the QuadCross Series in 2008, with a full schedule of events throughout the southwest U.S. as well as another season-ending drawing for a tricked-out Yamaha YFZ450.