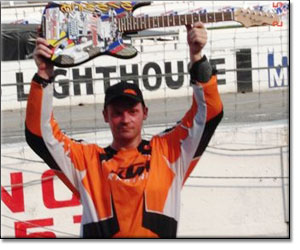 The KTM pilot felt confident coming into this event despite the fact that it was his first ever Pro Supermoto ATV race. Farr has an extensive dirt track background which helped him prepare for the Supermoto race. “We were able to determine the settings we needed fairly easily coming into this event which helped the bike work flawlessly throughout the day,” stated Farr.

Farr started his day off well with a heat race win over former champion Nick Granlund. “I felt really good coming into today’s race and I’m glad to get the heat win. I knew coming into it that Nick was the guy to beat so I was glad to battle with him for a few laps and more grateful to pull away to get that top spot on the starting grid,” commented Farr after the heat win.

Farr admitted he was a bit scared when he saw the track because of the lengthy high speed straights. “I bet we were doing between 95-100mph on the straights which made me a little nervous since I didn’t have any leathers with me,” Farr continued, “The majority of the track was asphalt, more than I anticipated, but it was a fun course and I really enjoyed this event.”

In the main Farr and Granlund battled again for a couple of laps before Farr got out front and lengthened his lead. Farr competed aboard his KTM 450 XC dirt track race ATV and only made slight modifications to the suspension (stiffer springs) and gearing. The team also changed out the tires for a harder compound. “I am amazed at how well the KTM continues to adapt to every type of racing. I plan on competing in two more GNCC’s as well as the Endurocross in Oklahoma to further show the versatility and strength of the KTM Sport ATV,” commented Farr.

The champion spoke highly in regards to the potential of the sport of ATV Supermoto Racing. “I see a tremendous opportunity for growth in this segment of ATV racing. I believe this could be very popular amongst the dirt track guys that I normally race with.”

Thus far, Farr has secured one championship this year and could quite possibly seal up a second one in Pennsylvania this coming weekend. Farr stated, “I am happy to have won the Supermoto Championship and am proud to give KTM its first ATV title. I hope to make it two championships in a row as I return to the EDT Series where I am currently leading the points in the Pro-Am Unlimited class.”

In addition to his prize money and sticking to the Nashville music theme, Farr was awarded an electric guitar for his championship win. “I’m not quite sure what to do with it, but it definitely stands out and looks cool amongst the other trophies I’ve earned,” said the champ.