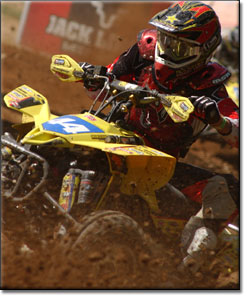 The inaugural visit to the Virginia Motorsports Park came up short after sweeping the podium in London, KY. The three-man team pulled second and third honors in both events, with John Natalie securing the top spot.

Heat and humidity were in abundance on Friday and Saturday with the clay, hard packed track starting out muddy on Friday. By the time the two main events came around on Sunday it had dried up to a slick, fast, superfreeway.

Overall, most of the riders liked the track with Suzuki’s Chad Wienen getting down to business setting the weekend’s fast times with a series of 1:48 laps. John Natalie was next fastest with 1:49’s while Gust was third in the 1:49 -1:50 range with Wimmer consistently running 1:50’s.

The various heat races went pretty well for the Suzuki camp with Wienen and Wimmer capturing wins. At the end of all the qualifying heats, the net result was that nothing much had changed.

Dustin Wimmer maintained his point lead while all the usual guys were going fast. It seems that so far in the race season four riders have emerged as potential winners: Wienen, Natalie, Wimmer, and reigning champ “Digger” Doug Gust.

On Sunday, the cloud cover of the previous few days disappeared and a dry, slick track faced the riders. The race would be sort of a MX/TT but with peaked step-up’s and assorted supercross type obstacles.

The Round 6 Main Event was typical of the last few races, Keith Little holeshot and was quickly passed on the first lap by the Natalie, Wimmer, Wienen, Gust freight train. The race was on with Natalie in first but a hard charging Wienen coming on fast.

Towards the end of the race Wienen had a rock lodge in his chain/countershaft and that was enough to decide the event. Natalie took the win. The podium ended up Natalie, Wimmer and Gust.

The Round 7 Main Event started the same as the previous one. Little got the holeshot and was quickly passed by Natalie. Wienen got hung up by Little for several laps before he, and the rest of the Suzuki riders blasted around him.

Wienen was on the charge and cutting large chunks of time off Natalie. Things were shaping up for a repeat of the London race where Chad ran Natalie down for the win.

But the slick track got the best of Wienen as an over aggressive throttle hand saw the Illinois speedster spin out exiting a corner.

Once under way, Chad closed back up to Natalie but simply ran out of time in his quest for the win.

An unfortunate note – in the first lap of Round 6, Lost Creek Cycle/Suzuki/Yoshimura rider Joe Haavisto got crossed up with another rider and suffered either a hip or leg injury. It looks like Joe will be out for some time.

John Natalie’s double win tightens up the points even more. With three races remaining it is really getting exciting. Look for the Suzuki QuadRacers to come out on top!

Next stop on the WPSA Tour is The AMSOIL Wild Cat Open Championship in Rossville, IN on July 21-22.