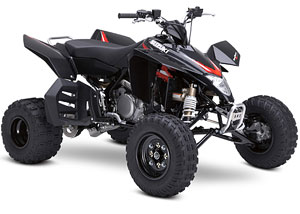 Suzuki introduced fourteen new or significantly updated motorcycles and ATVs for 2008 at this week’s annual Suzuki Dealer Meeting. Suzuki dealers from around the country converged on Las Vegas to catch a glimpse of the exciting new line up.

Last year, Suzuki was the only major ATV manufacturer to have increased sales. Suzuki ATV Operations Manager Rod Lopusnak highlighted some of the reasons behind their success: “When you combine passion with Suzuki engineering and technology you get an outstanding, and growing line of rugged, versatile, and powerful ATVs”.

Perhaps the best illustration of this is the significantly updated QuadRacer R450. New features include yet another ATV industry first for Suzuki – the new ECM Logic and Ignition Control System.

There are many additional updates. A new countershaft has been added for better gearshift feel. Rubber mounted handlebars cut down on vibration and a textured slip- resistant seat cover was also added. The new seat cover, in addition to adding increased control, also helps with rider comfort.

The suspension wasn’t left alone either – the incredible new Kashima coating process has been applied to both front and rear suspension. This coating reduces friction and provides an overall smoother suspension stroke. The suspension settings in general have also been re-vamped to provide an even more responsive feel, and larger rear tires added to complete the picture. The swingarm has been significantly strengthened and extra rigidity built in for improved handling. The best keeps getting better.

If all that were not enough, a special all black Limited Edition will also be sold in limited quantities. The unit features black wheels, frame, bodywork, and an aggressive new graphics package.

“Like any championship winning ride,” Lopusnak said, “the Suzuki QuadRacer R450 continues to be updated and improved constantly to maintain its dominance over the competition.”

The groundbreaking KingQuad line wasn’t left alone either. Although more details will be coming soon, the KingQuad line has been both expanded and improved for 2008. The flagship KingQuad 700 has been upped to 750cc in displacement along with numerous other improvements that will insure its position at the head of the pack.

More information will be available soon, but it is plain to see that Suzuki is not sitting on its laurels. The 2008 line clearly demonstrates that Suzuki continues to offer the most competitive ATVs in each market segment.