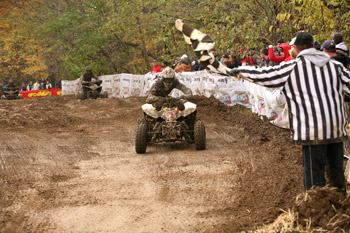 Team Rockstar / Yoshimura / Suzuki’s Chris Borich took his third win of the season in the final round of the 2008 Can-Am Grand National Cross Country Series in Crawfordsville, Indiana.

Borich started strong in the muddy conditions of the Klotz Ironman event and pushed himself to the top three early on.

As the leaders settled into race pace, Borich made his move into the lead in the third lap and would maintain the front position to the checkers.

Despite the best efforts of his competitors, Borich and the Suzuki QuadRacer R450 would not be denied victory in the final round.

Borich was excited with the result: “My Suzuki QuadRacer R450 works great in all conditions but it really hooks up in the mud. We got out front early and just went wide open and came out on top.”

With the victory, Borich claimed second place in the 13-round 2008 Can-Am Grand National Cross Country Series with 241 points.

Dirt Trax Onlinehttps://www.atvmag.com
Check back frequently for new content and follow us on social media!
Previous articleYamaha to Celebrate at Ironman GNCC Series Finale
Next articleCan-Am All About The Beef