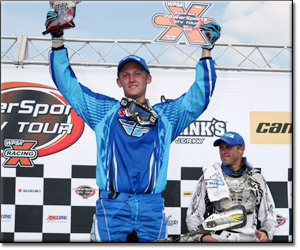 Team Suzuki continued to power its way through the WSPA series with another main event win for Jeremiah Jones at Jack Link’s “Feed Your Wild Side ATV Championship.”

His first place finish on Saturday followed his thrilling victory in round 4, and his back-to-back wins put him in striking distance of both current points leader Dustin Wimmer and Suzuki teammate Doug Gust.

SATURDAY-ROUND 1 -The first heat race seemed to sow seeds of victory for Jones, who took first in his heat ahead of?teammate Doug Gust. “I got the holeshot, and from there on it was smooth sailing,” Jones said, who narrowly lost to Dustin Wimmer in the second heat.

But in the main event Jones was not to be denied, pulling out ahead of Wimmer on the third lap. “Wimmer got the hole shot, and I came out right behind. It took three or four laps for me to catch up. Finally, I got around him and took him down.”

Doug Gust had a tougher start from seventh position, but climbed the ladder to a third place finish, and the podium was two-thirds Suzuki.

SUNDAY-ROUND 2 -Jones continued his domination by winning both his heat races on Sunday. In the main event, both Jones and Gust were gunning for Wimmer until a mechanical issue took Gust out in the 10th lap.

Doug had been leading Jones through the pack and they had their sights on Wimmer when Gust’s machine faltered. “I heard something on lap two and held back,” Gust explained, “but then it went away and I was able to make up some ground. I pulled into second with Jeremiah behind me, and then all of a sudden I was dead in the water.” With Gust sidelined, Jones closed on Wimmer but ran out of time coming in a close second.

Team Manager Wayne Hinson was excited for Jones. “It was a great weekend for Jeremiah,” Hinson said, noting that Jones has pulled into third in overall points standings, only 20 points off from Wimmer.

Doug Gust is in second only 8 points from the # 1 spot. Next stop on the WPSA tour is Rossville, IN on July 22, 23rd. Watch for Team Yoshimura Suzuki’s full court press next weekend in Sunset Ridge, IL.