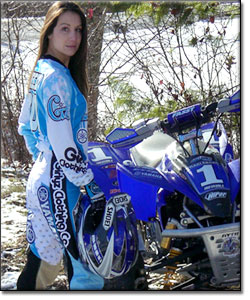 Girlyz Pro ATV Racer, Traci Cecco has the kind of natural beauty you might expect to see on the cover of a women’s fashion magazine.

Fortunately for the world of four wheel racing, she is instead, out shredding through the countryside smokin’ the competition on her Yamaha YFZ450.

An active positive roll model for young girls coming up in this world, she is anything but a just a pretty face smiling for the camera. A woman with true grit, talent and determination, she has taken quad racing to a new level.

At a little past the half way point of the GNCC (Grand National Cross Country) ATV Championship, Traci has taken seven out of eight possible overall wins and given the competition something to worry about again.

What’s her secret to success? The age old combination of absolute commitment to hard work and training coupled with experience and tenacity. She trains as hard as the men, competes in triathlons to keep in tip top shape, and when it comes time to deliver the real thing, she comes through.

Winning isn’t new for this veteran pro racer, she is consistent and expects this of herself at every race, putting together a race program that makes sense and has earned her five GNCC Championships already.

No stranger to putting a full minute gap in front of the second place rider, Traci has established herself as the premier woman in her class, the one to beat, the one to catch, a seemingly daunting task for the competition and something that rarely happens.

Traci started riding quads when she was 10 years old and has won numerous championships since starting to race at the age of 16. With 5 GNCC Women’s Class Championships under her belt, she is in pursuit of her 6th and it’s looking good so far.

Not one to let the boys have all the fun, she is the first female racer to win a GNCC Overall and was the recipient of the 2003 GNCC “Swamp Fox Award” given to riders showing true grit and sportsmanship under pressure.

Cecco pushes hard and is no stranger to overcoming the obstacles. In 2004 she broke her arm in a crash during the race but continued on to finish second. In 2003 she had to win three out of the last four events to take the championship.

With determination and a cool head, she wrapped it up on the last lap of the final race, many times working her way through the pack in those last races to get it done.

Traci will continue to race for the championship at Round Nine of the GNCC Championship series, September 1-2 at Mountain Ridge, Sumerset PA.

If you get a chance to make it to one of these events, you won’t be disappointed. You’ll be able to spot her quite easily out in front on her #201 Yamaha YFZ450 wearing the Girlyz “Vision” Race Gear. Get that autograph and put it proudly on the wall. There are very few women out there like Traci Cecco.