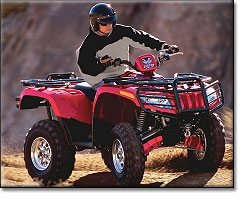 Arctic Cat has just debuted all-new bodywork for the new 650 H1 and the 650 V-Twin. The fresh look is reminiscent of a late model Jeep Grand Cherokee and features compound headlights with the now-popular slanted, aero ATV look.

The rough edges have been filed smooth and the whole look is cleaner and more modern. Cat’s decision to offer both the Kawasaki 650 V-Twin and the new single cylinder SOHC, made-in-the-USA hemi engine gives ATV shoppers two choices in a very competitive marketplace.

Look for the new plastic to be used on more models in Cat’s line-up in North America within the next twelve months.

Don’t Call It A Comeback? 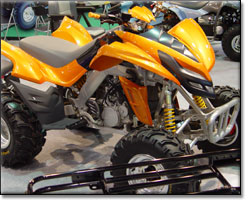 Remember Cannondale? About three years ago, the elite bicycle manufacturer was making a play into the ATV biz with an excellent pure sport 4-wheeler featuring EFI and a killer chassis.

It seems Dinli Corporation of Taiwan has purchased all the tooling from Cannondale’s now-defunct ATV effort and will be building the beast off-shore. It should be available in North America within the next twelve months.

The Consumer Product Safety Commission (CPSC) quietly released a study in the fall of 2002 that shows, on a per capita basis, ATV-related injuries were lower than most other recreational activities. The injury statistics were gathered through the National Electronic Injury Surveillance System (NEISS), which compiles statistics from a sampling of 99 hospitals, including children’s hospitals.

The statistics revealed the estimated rate of product-use related injuries was 201.0 for bicycles and accessories, and 73.9 for ATVs (all figures are per 100,000 population in the U.S. and territories). Other recreational activities had the following rates – baseball, softball 106.9; football 147.3; and basketball 232.3.

The statistics refute many false perceptions regarding ATV rider safety. Although the figures may surprise some, many people who ride and use ATVs regularly agree the study confirms their experience.

The ATV industry points to the extensive ongoing promotion of rider safety as an important factor for improving user safety. The Canadian All-Terrain Vehicle Distributors Council (CATV) is a national not-for-profit trade association and has played a leading role in promoting the safe and responsible use of ATVs across Canada.

The courses are based on field-tested techniques regarding operating controls, reading terrain and analyzing risk, turning, ascending and descending hills, avoiding obstacles and stopping at slow and higher speeds. A separate course is also available for children under 14 whose parents permit them to ride an ATV.

For additional information go to www.catv.ca.

Honda Canada Inc. announced the launch of the Honda Junior Red Riders Club for young off-road motorcycle enthusiasts in Canada. The program focuses on safety and providing parents with answers to many of the questions they have relating to off-road motorcycling.

The Junior Red Riders is tailored for enthusiasts’ from 6 to 12 years old; however, Canadians of all ages are welcome to become members of the club. Membership is absolutely free and all members receive the following benefits: 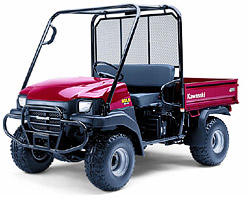 Kawasaki Heavy Industries’ successful alliance with Suzuki Motor Corp. has enabled both brands to expand their product lines in the U.S. market and to share development costs for select models such as Kawasaki’s Prairie 700 and Suzuki’s QuadSport Z-400.

Kawasaki pioneered the off-road utility vehicle market when it introduced the first MULE utility vehicle in 1988, and today the line consists of four models, all of which are built at Kawasaki’s manufacturing facility in Lincoln, Nebraska.

Rumors of Kodiak-Grizzly Combo from Yamaha 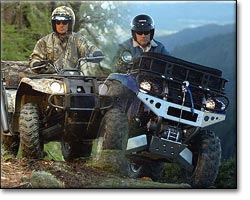 Yamaha has been absolutely silent on this but we have some pretty solid scuttle the company is coming with a cross-over model which marries the best features of the 450 Kodiak with the independent rear suspension of the Grizzly 660.

Whether or not the new Sport Ute will be completely based on the Grizz chassis with a sleeved down engine or whether it will be a Kodiak with a different rear clip, we’re not sure.

One thing’s certain. This new model will fill a gaping hole in the market for Yamaha. Many consumers have felt there’s been just too big a gap between the Kodie and the Grizzly and have gone shopping the competition in the 500 to 600cc range.

If you’ve ridden a 2004 Grizzly, you know how good Yamaha’s IRS is. Improvements this year have made it one of the best riding ATVs in the biz. We think this new one will be a huge bulls-eye for the Big Y. 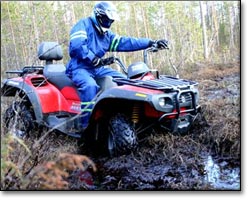 Some of the All-Terrain Vehicle crew were recently invited to the Lapland region of Northern Finland to get a look at what the country has to offer for both summer and winter motorized recreation.

We were pleased to see fabulous enthusiasm for motorsports all over Scandanavia – particularly in the central and northern parts of Finland, Sweden and Norway, where the terrain looks a lot like the northern parts of the United States and many areas of Central Canada.

Our good friend, Joni Launonen, of Rovanami, Finland sent us some shots of himself testing a two-up Traxter in a swamp near his home.

There are plenty of trails to ride in these countries and All-Terrain Vehicle magazine will be featuring a story soon on how you can get an all-inclusive travel package to ride ATVs there. It is truly a once-in-a-lifetime trip for ATV enthusiasts.

For more information check out www.northern-europe-inc.com 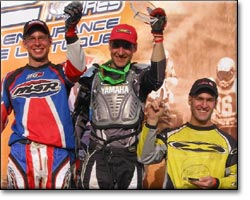 Team Splash’N Dirt rode their ITP/Yamaha Canada YFZ-450 to an impressive victory in the Les 12 Heures d’Endurance De La Tuque quad race. The speedy Pelchat brothers, along with team mate B. Prevost, took an early 2 lap lead after the first 4 hour interval and never looked back. At the end of the 12 hour race Team Splash’N Dirt finished an incredible 7 laps ahead of the next closest competitor and still looked as if they had more in the tank.

Sixty teams were on hand to participate this year including two all-female teams and a male/female team. Thousands of spectators flocked the small Quebec town of La Tuque to see the race many people are calling the toughest ATV race in North America.

In just it’s third year the 12 Hour Endurance race has doubled its entries and has seen competitors travel from as far as France and Belgium in order to take a crack at the $5,000 1st place prize. By the way – Team Sentier Quad walked away with $2,000 cash as the 1st place female team. Congratulations to M. Tanguay, M-E Turmel and A. Villeneuve who also happened to be riding a Yamaha YFZ-450.

Be sure to get a copy of the June issue of All-Terrain Vehicle Magazine to get the full scoop on this truly amazing race.

Shining Some Light on the Mongoose 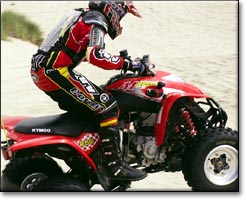 We first laid eyes on Kymco’s ATVs last October at the Supertrax Snowmobile & Powersports Show in Minneapolis. Surrounded by some of the coolest looking Kymco motor scooters we’d ever seen was the Mongoose 250.

This full-sized Sport ATV uses a 249cc single overhead cam 4-stroke connected to a belt driven CVT transmission. Yup, a unique combo in this class but good enough to win the 250 class in the Spanish Baja Desert Endurance race last October and, although the Mongoose isn’t a hardcore Sport Performance offering, it’s beautifully detailed, high quality plastic, excellent wheels and tires and familiar engineering probably cloned from some of the 4-wheelers we know and love in North America.

Kymco has been around since 1963 and, by 1998, had rolled its six millionth motorcycle off the assembly line. The company also produces 50 and 90cc Mongoose kids’ models and a rack equipped MXer 150 featuring a CVT tranny, reverse and electric start. New for 2004 is the full sized Utility MXU 250, powered by a 249cc 4-stroke, driving through a continuously variable transmission.

All Kymco ATVs come with a 12 month warranty and are distributed by STR Motorsports in Inman, South Carolina. You can contact them at 800-845-7007 or check the web at www.kymco.com

Suzuki Canada Inc. donates a Burgman 400 to the Leukemia Research Fund of Canada for their Spring Gala. Proceeds will go to support vital Canadian research into leukemia and other blood related diseases.

The Burgman 400 is one of the new wave of Suzuki “mega-scooters” that have gained extreme popularity across Europe. Sporting sleek stylish lines and user-friendly controls, it is easy to see why the Burgman is becoming such a hit in Canada too. Featuring large under-seat storage capacity and simplicity in operation, the Burgman 400 provides the right amount of practicality to go along with its huge fun quotient.

A featured attraction of the live charity auction being held at the Spring Gala, the Burgman’s appeal should attract a large audience of bidders. Proceeds raised from the auction will go to support vital Canadian research into leukemia and other blood related diseases. This is the second year in a row that Suzuki Canada Inc. has donated a vehicle for the LRFC Spring Gala.

The organization has made quite a difference over the past 45 years. In children, the cure rate now exceeds 79%. Leukemia is the only form of human cancer where such advances have been realized.