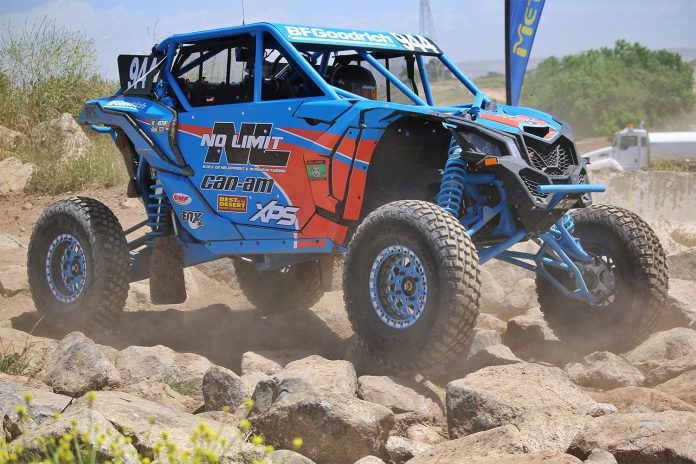 The course was made up of an asphalt racing surface of a drift car / karting circuit that then led into a short-course dirt track. Chaney, 2017 TORC series Pro Mod champion, was over three seconds faster than the rest of the field in qualifying. Then, in Saturdays race he led every lap from the pole. On day two, Sunday, Chaney started fourth due to the invert, but took over second on lap two and then owned lead one lap later. He held on for the win from there.

“My Can-Am Maverick X3 side-by-side vehicle did awesome this weekend,” explained Chaney. “We just put fuel in the car, lowered it for the course and went out ran it. These EVO-tuned cars are just so fast. I have to give it up to them. Hopefully we can take it out to GNCC in two weeks and get another win.”

ULTRA4 Racing
Beau Judge, filling in the for an absent Phil Blurton, won the 2018 Ultra4 MetalCloak Stampede held May 11-12, at Prairie City State Vehicle Recreation Area near Cordova, Calif. Blurton and Judge usually team up to compete in the No. 944 No Limit / XPS Lubricants / Can-Am Maverick X3 X rs Turbo R vehicle in the Best In The Desert series. Blurton also decided to enter the ULTRA4 series this season after a successful rock debut with the vehicle at the 2018 King of the Hammers event. However, due to a prior commitment for Blurton, Judge had to replace his friend and drive solo for this event.

Ultra4 Racing rules allow for one substitute driver during the season, so Judge took over driving duties this time and did not disappoint on the rugged two-mile course that consisted of tight turns, whoops, jumps, high-speed runs and tricky rock sections. After qualifying second, Judge won his heat to set himself up for a first-row start in the six-lap main event. While other competitors dropped out of the race, Judge led from start to finish to notch the victory.

“The Can-Am Maverick X3 X RC Turbo R race vehicle was the perfect platform for this type of course,” said Beau Judge to reporters after the race. “With 172HP and great suspension, I was able to go fast when I needed to, and the Smart-Lok four-wheel drive system kept all four tires pulling in the rocks.”

LOORRS
Corry Weller (DragonFire Racing / Can-Am / Weller / Maxxis) used a savvy, late-race pass on the outside of turn one to win the Production Turbo class, May 5, at Round 3 of the Lucas Oil Regional series in her hometown of Chandler, Ariz.

Weller, who drew her preferred start on the outside of row one against 14 other racers, began the race by tucking in behind Can-Am Maverick X3 vehicle driver and teammate Paul OBrien, who led for much of the race. From here, the multi-time short-course champion used her skills and took full advantage of her Can-Am vehicles impressive power to continually reel in the leader, seeking a perfect moment to make a pass. She got her shot on the white flag lap, as she caught OBrien in turn three and drew up alongside of him through turn four. The two Can-Am pilots drag raced neck-and-neck down the front straight until Weller made her pass for the lead around turn one. She held her lead until they crossed the finish line on lap 10, bringing home another impressive win and increasing her class points lead.

“I have almost a 20-point lead for the championship right now and I hope to keep that going for the rest of the season,” said Weller. “On a technical side of things, everything on my Can-Am Maverick X3 vehicle is holding up well. Its nice to get another win and also post the fastest lap time in my class.”